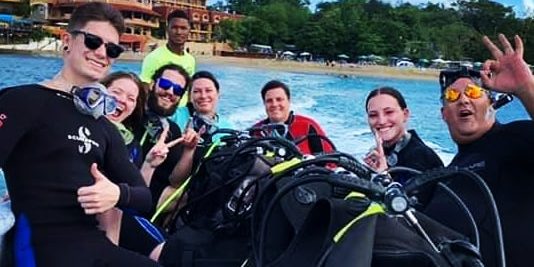 Well it’s been a year, well a little more than a year since we opened the doors & slipped into the ocean as the owners of Superior Dive Sosua. Our family run PADI Dive Resort is based in the beach town of Sosua on the beautiful North Coast of the Dominican Republic & our / my dream is now very much a fully functioning scuba diving reality. 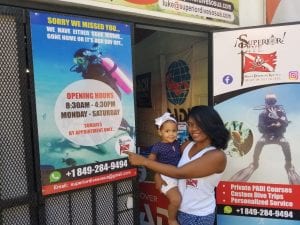 Sosua was founded in 1938 as a haven for the Jews escaping Nazi persecution, it was an isolated settlement on the coast of the Dominican Republic that became home to approximately 800 German, Austrian & Polish Jews. Tourism took off here in the mid 1980’s & it’s fair to say since then it’s seen it’s seen it’s highs & lows. It’s known for it’s affordable living, great beaches, crystal clear warm waters & great climate. The darker side of Sosua is it’s sex tourism industry but believe me not everyone is here for that. It can be part of your vacation (should you wish) or it doesn’t have to be, the choice is yours. 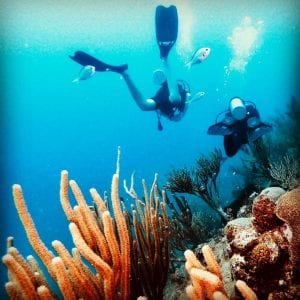 So why choose to open a business in a country where people tell you that the only way to get a million dollars in your bank account is to come here with two. Back in 2006 I was looking for an affordable vacation & like most Brits my thoughts were along the lines of Spain & the Canary Islands but it didn’t seem like we were getting much bang for our buck. The travel agent then suggested a weeks all inclusive vacation in the Caribbean, in fact in a shiny resort in Punta Cana. If truth be told I knew absolutely nothing about the Dominican Republic, zero, but when I arrived I was SOLD. It was like a being in a big shiny marble Caribbean Disneyland where the sun always shines & there is unlimited food & alcohol. From that point onward the dream was to find a way to make a living here. The go boldly go where no man had gone before (well not quite) & find a way & a means of making money in a country where I didn’t speak the language & knew nothing about it’s business practices.

I’d had a great education but left school with a bunch of OK GCSE results, they could’t pigeon hole me, I was pretty good or what’s a better way to put it, pretty average at everything. I grew up in a family run country pub & restaurant then I started working in the bar & restaurant industry from the age of 16. I’d moved around & traveled. I wasn’t sure what to do with my life. After a year in Australia in 2000, where I actually did me first ever dive under the close attention of my ‘brother’ Adam Foster, I returned to England then moved to Scotland then back to England. Jobs in the bar industry, insurance & recruitment followed. I eventually took on the lease of a small pub opposite my old school but a life in the tropics was calling so at the start of January 2011 the bags were packed & off to Bayahibe we went. After two weeks in yet another all inclusive a taxi ride to Cabarete to a new apartment & a new life awaited. No job, no clue & not a single friend or family member in the DR ready to give a helping hand. I was out of the compound of the All Inclusive & ready to tentatively discover the real Dominican Republic. 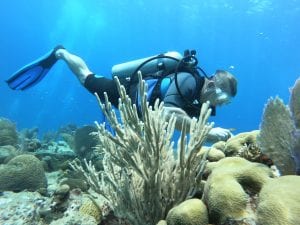 So after a little research it seemed like the North Coast of the Dominican Republic was a good option to start a new life. There is a large ex-pat community here, people from all over the world have settled in the Sosua, Cabarete & Puerto Plata area. Cabarete & Sosua in particular are a water sports enthusiasts heaven. I wasn’t sure that I was a water sports enthusiast but I was darn sure that I didn’t want to work in the bar / restaurant industry. So here came the choice, kite surfing or scuba diving, it was a coin toss. Literally it was a coin toss & scuba diving won. I didn’t have a bottomless pit of money far from it but I’d decided or rather the coin had decided that scuba diving was where my money would be spent. So the research began & I started speaking with different dive schools in Sosua. I had my PADI Open Water License & the next step was to find a dive school that I could carry on with my Advance Course then all the way to professional level. 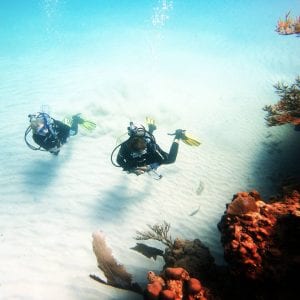 After some deliberation & speaking with both owners Colin & then Michael I settled on Northern Coast Diving. This is where I would do my Advanced & Rescue Courses & this is where Michael would then offer me a 3 month unpaid internship for my PADI Divemaster Course. After I’d become a DM it was straight to Punta Cana to do my Instructor Examinations. My mentor was Matt Wenger a recently qualified PADI Course Director from Switzerland. I owe a lot to this man for developing my understanding of diving, the underwater world & the way to teach. Matt is deservedly now a regional manager for PADI Europe working mainly in the Maldives, he’s a great guy with a history that in some ways interchanges with my own. I have a lot of respect for what he did for me. I have a lot of respect for the whole crew at Northern Coast Diving. I spent 6 years there learning the ropes, busting my balls & most importantly learning how to do the in water part of my job professionally & safely. I felt that after six years & working my way to being the lead instructor in the dive center that the time was right to step it up. Then came a year or so at Dive Cabarete as general manager where I had the chance the polish myself & to learn the back office, accounts, payroll, & working laws in the Dominican Republic. The next step was somewhat down to having the ability to be in the right place at the right time. 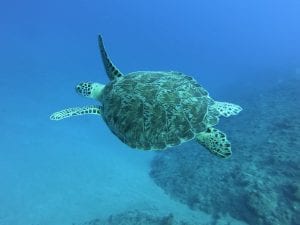 There is nothing more in important in life than building good relationships with people, saying please & thank you & having a respect for others. Hard work & dedication to what you do will open doors for you but you have to be you & not pretend to be someone you’re not. Immerse yourself in being the best that you can be. Over the 7 years here in Sosua working at both Northern Coast & Dive Cabarete I’d like to think I built a good reputation as a scuba instructor & also as a person. My life here hasn’t always been rosy & I’ve had my ups & downs as well as some ugly moments but I’ve stayed true to myself. At some points I lost focus but I got it back & I learned the ins & outs of the dive industry here & the way to survive & to work in this town. Coming in at ground level helped, working my way up has helped, it’s all been a learning curve. I know the good, the bad & the ugly side of life here. I would caution anyone coming to a new country not to start throwing buckets of cash at something they don’t know enough about. Running any kind of business here is different to running a business in your country of birth but it’s possible. Be prepared to piss people off, you can’t please all the people all of the time & 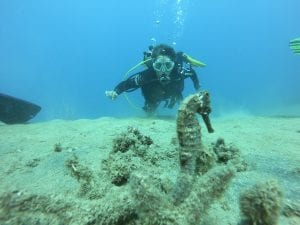 people sure get shitty when you start doing what’s right for you. I’m lucky to be surrounded by a small handful of great people including my wife Rosanna & my Mother Maddie. I’m eternally grateful to everyone that has played a part in my journey so far & especially to the two people that backed me to start the ‘new’ Superior Dive Sosua. I’m indebted to Gilles & Steve for their backing & also to the original owners Chuck & Wendy for giving me the opportunity to take their dream & make it my own. Superior Dive Sosua has had a great first year in business & we are 100% focused & dedicated to being the best that we can be every single day. Here’s to many more successful years to come… Come & join us at Superior Dive & experience the underwater beauty of Sosua Bay – ‘We Get You Wet All Over’…

The North Coast of the Dominican Republic – A Diamond in the Rough
December 17, 2018

Go to Top
× Chat On WhatsApp